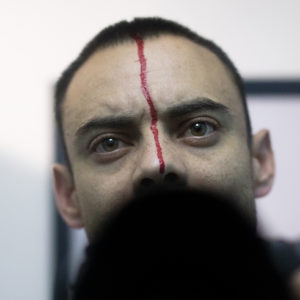 Mexican artist born in Quintana Roo, trained as an Architect in Chihuahua.

His approach to photography was self-taught, this allowed him to play with the established rules and propose an alternate reality.

Co-Founder with Ricardo Santos of NOESUNAGALERIA, a self-managed cultural project in Mexico City for national and international exhibitions

Fudarylí has ​​also been internationally awarded, such as the silver medal in the PX3 Prix of the Photographie in Paris, France, 2015, and David Alfaro Siqueiros’s Scholarship for artistic creation in 2011.

– I’m the “Trickster”, an agent of chaos, an agent of change, My work is an entropic projection of altered realities, each work a different seed in infinite fertile lands.

Art as a transformation tool allows me reconfigure to my pleasure the reality, the environment in which I live and the minds of the spectators.

The daily geometry of our death, from birth until we cease to die. compose what he calls “altered reality of human energy” which graphically describe the behaviors in different states, different vectors fired in all directions in a fractal way, both introspection and projection.

His art does not represent things in a two-dimensional way, but hepta-dimensional way, it analyzes all the spatial axes (north, south, east, west, up, down and the point where you are) and freezes a moment of our human supra-reality.